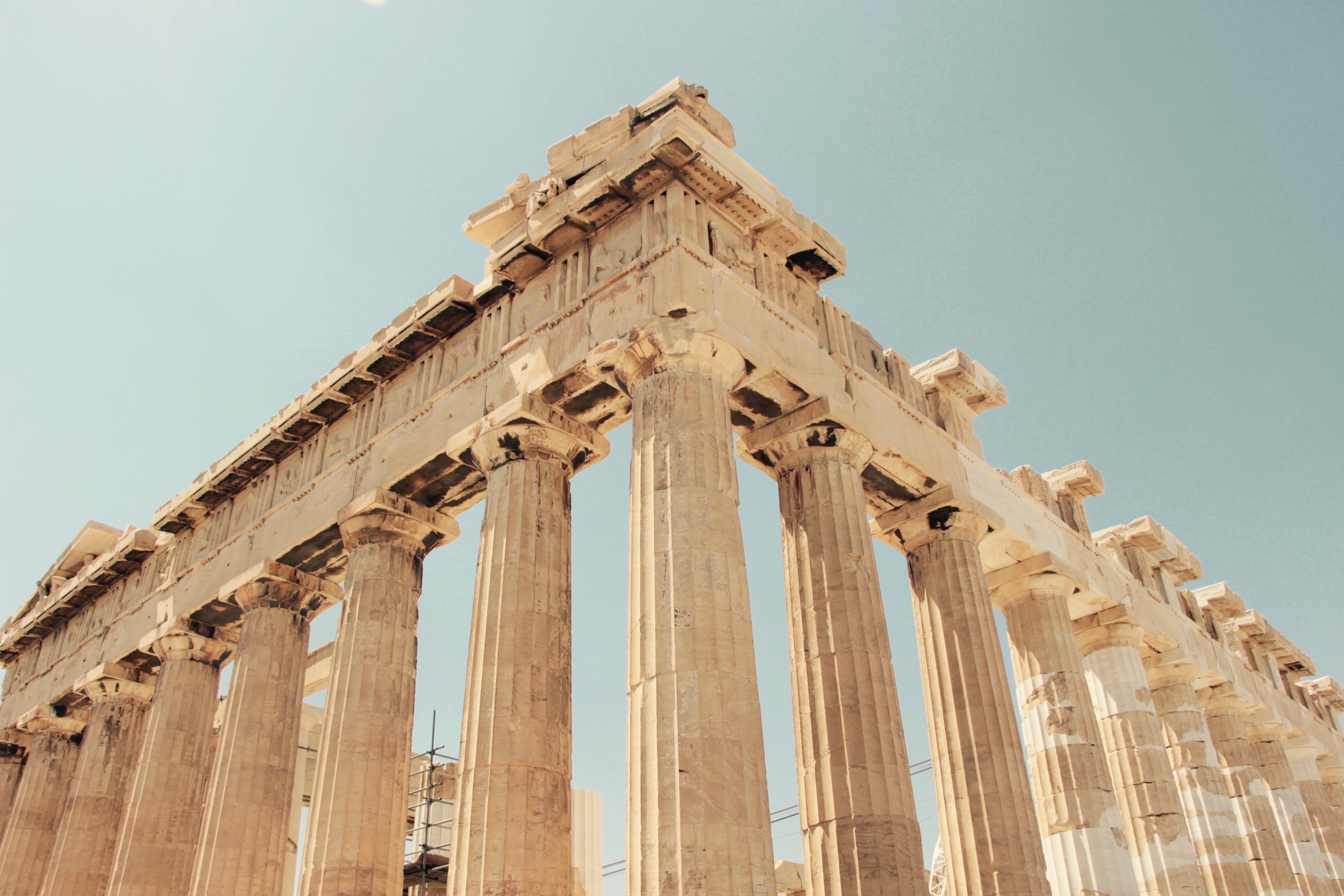 Timeless philosophy, large-than-life mythology, contributions to mathematics, science, sports, democracy. An intricate fabric of threads that tie together modern civilization as we know it. A torchbearer of socialism in the world’s most powerful commonwealth of mostly capitalistic countries. A teetering economy with a thriving tourism industry. A cacophony of contradictions.

That’s Greece for you.

The relatively cheap costs, wallpaper-worthy places, easy access to Athens from anywhere in the world make it an ideal destination for a 10 day getaway! Or your honeymoon. If you want to do the entire country justice, do consider spending at least 2 weeks.

Greece opens up between April and October. Quite literally. Even ATMs don’t function in the islands between November and March. We went towards the end of March — while not hindering the trip in anyway, it’s still better to stick to the season.

I’d called out in my Vietnam blog post that I’m by no means a budget traveller. With Greece, that was especially true — I’d meant this to be an ultra-luxurious trip (given that this was our honeymoon) and our costs, just for Greece came to ~₹350,000 for 2. To be sure, this is a budget that you can cover a good chunk of the whole of Europe with, on a shoestring budget. The main line items were (for 2 people):

We flew Qatar Airways; economy onward and return in business class. This cost us some ₹160,000. If you’re flying economy roundtrip, you can do it at ₹110,000 for two on a full-cost carrier like Qatar. The flights within Greece cost us some ₹40,000 in total (for 2) — all economy. We had booked a first class cabin on a ferry from Mykonos to Santorini, but due to a storm the ferry got cancelled. We had to then book a last-minute flight between the islands, which set us back by a good ₹55,000 for two (bringing our total Greece trip costs to ₹4L)!

Deals were aplenty at the time we booked — so we got a sweet ₹30,000 off on our business class seats, bringing the cost down by a bit.

We stayed at top notch places in all our destinations — a cozy apartment at the heart of Athens, a beautiful cottage overlooking the beach in Mykonos, a quaint villa opening out to the Aegean Sea in Oia (Santorini), and a penthouse on the beach in Zakynthos. And, the business class on Qatar gave us a complimentary night at The Westin in Doha for our long layover. All in all, we spent some ₹60,000 on accommodation. 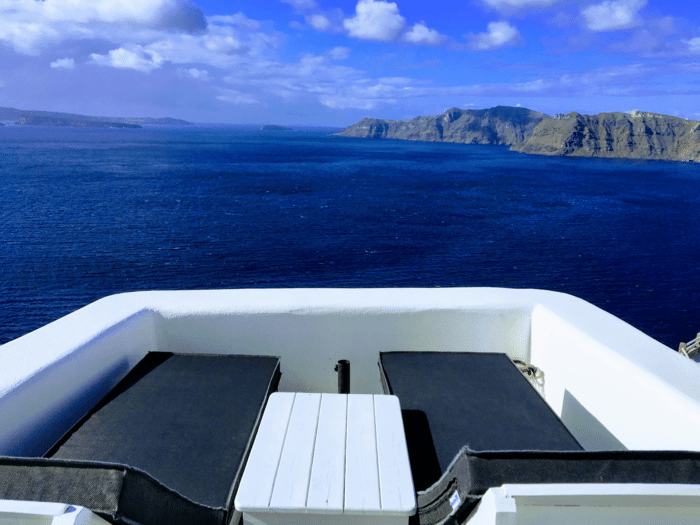 Views that come at a price — the view from our suite at Santorini.

The same place can be cheaper in some other side — so, make sure to check multiple websites before booking. I personally prefer Booking.com because many places on Booking allow you to pay at the time of check-in.

Greece is part of the Schengen region and so you need to apply for a Schengen visa which costs about ₹6,000 per person. It’s a pretty straight forward process — if you are in Bangalore, you need to go to Manipal Centre to apply via GVCW. I had a B1/B2 US visa on my passport which made the process seamless - so if you have a long term US visa, it should be straight forward. If not, I think there are a couple of hoops to jump through. It took about 7 days for us to get our passports back.

Make sure you have your documents — cover letter, 6 months of finances, reason for return (leave letter from the office), etc. sorted so that the visa process is a breeze. The requirements are specifically mentioned in the website. Just follow that to the letter.

A good chunk of our daily expenses boiled down to car rentals — on average we spent around €30 per day for a hatchback and €10-20 per city in fuel. Food is pretty cheap in Greece and you can get by an entire day with €15 per person. Almost all tourist spots have entry tickets and that varies from place to place, naturally.

Indian license is accepted for car rentals in Greece although by law you need an IDP.

As I mentioned, we covered four regions — Athens, Mykonos, Santorini, and Zakynthos. Except for Athens, in the other places, we spent a good chunk of our days just driving around the islands and soaking in the beauty of the places rather than just checking off tourist spots.

Athens is a bustling metropolis, the capital of Greece, a city of historic fame caught in the throes of today’s economic machinery, struggling to keep up with the world. Alphas, betas, gammas, and epsilons hit you from the time you step off the plane and you feel like you are in a confounding mathematical equation.

We landed on a Tuesday afternoon and slept through the entire day in our cozy apartment after a lunch of pita bread and hummus (Soundarya vowed never to trust my food recommendations after I suggested this combo). While people are friendly, the harsh economic conditions have led to spurts in crime — we were almost robbed on a busy metro on our very first day in the country!

We’d budgeted for 1.5 days in Athens, but lost the first half to sleep and had to spend a busy second day hopping across the city. Our second day went something like this (have marked must-visits with ⭑) 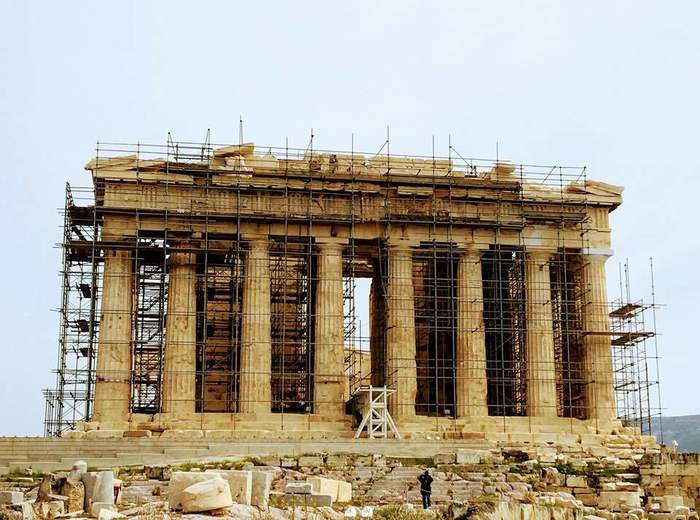 As a nerd, Acropolis and Hadrian’s Arch fascinated me. Just the sense that Socrates and Plato walked the same steps and rested against the same pillars or that I was standing at the same place that Hadrian rode through, gave me goosebumps. 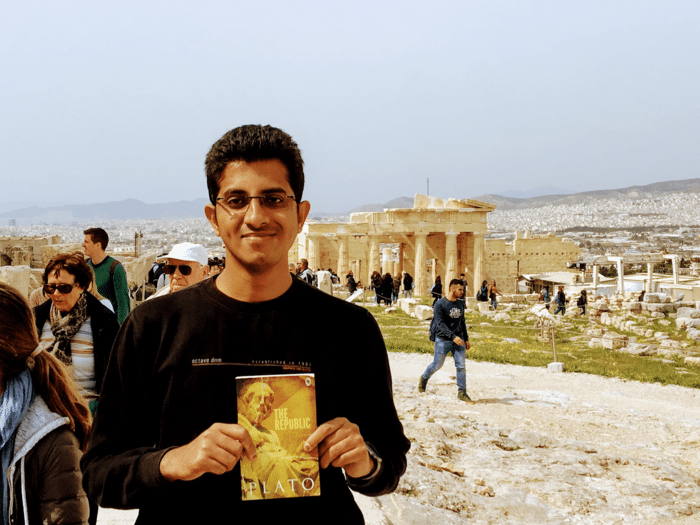 Sadly, though, no goosebump can offset gastronomic cravings and by the very second day in Greece, I was dying for some spicy Indian food. 😢Soundarya did a facepalm and agreed to satiate my taste buds at Namaste, an Indian restaurant just south of Acropolis. And we tucked in for the night, before setting off to…

Tips: Make sure you pre-book the car rental. Taxis in Mykonos in particular are crazy expensive. And take an automatic transmission — even if you are used to manual. The cliffs can be really steep and the discord caused by left-hand driving can compound the problem. Mykonos was chilly and windy even in the end of March, so make sure to take wind-cheaters.

Ah, Mykonos. The quiet, unassuming island that you wouldn’t believe is a rave party town! After a short 25 minute flight, we landed at this idyllic island 200 kilometers south east of the capital. We had planned to spend just a day in Mykonos. After a brief walk to the immediately recognizable Windows wallpaper — the windmills of Mykonos — we strolled through the streets of Little Venice spotted with buildings full of white walls, blue doors, and dotted with colorful flowers in full blossom. We then rented a Volkswagen and just criss-crossed the island. But to give a sense of spots to head to, listing them down below:

We couldn’t visit the island of Delos as it was closed owing to heavy winds, but I hear it’s a good day trip. 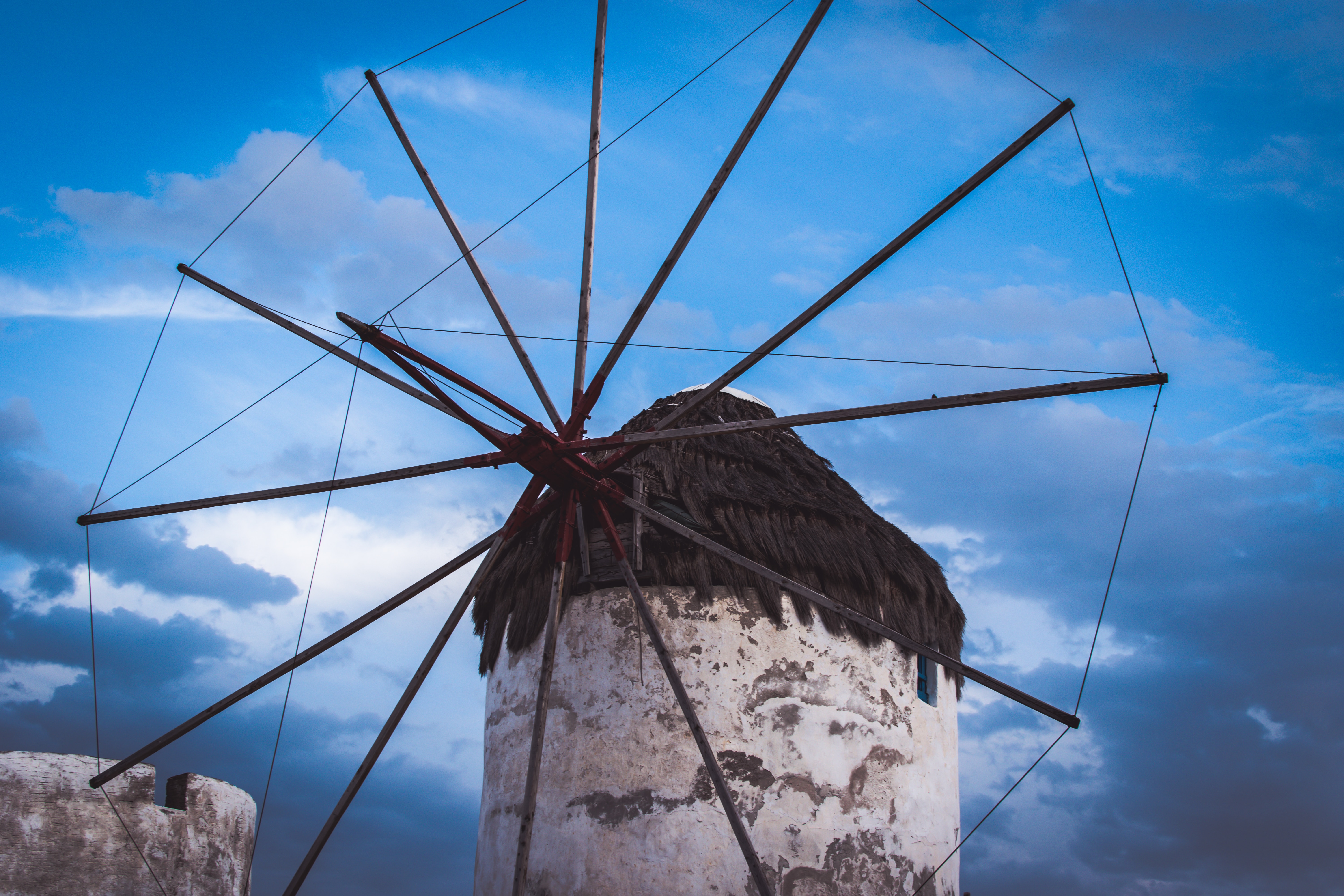 Tips: Take a place facing the ocean in Oia or Imerovigli. These are the expensive ones but also offer unparalleled scenic beauty. Make sure your suite is not too far from the main road or you’d have to walk quite a bit to get to your room everytime.

From awe-inspiring preservations of ruins to drop-dead gorgeous calderas sweeping across a magnificent vista, Santorini sure is a place you must visit at least once in your lifetime. For where else can you find an example of beauty despite destruction?

Those of you who don’t know, the island is a remnant of a volcano and is the site of one of the largest volcanic eruptions in history. Once you set foot on the island, it’s impossible to miss it — from the black sand, to the uneven paths, to the ruins of an entire city buried by the eruption!

It would not be a stretch to say that Santorini is one of the most beautiful places I have visited in my life. We spent about 3 days in Santorini, again mostly criss-crossing the small island in a Skoda. We took the alternate flight from Mykonos and landed in Santorini at around 9 pm. After a ride from the airport, we tucked in for the night. The second and third days were spent as follows: 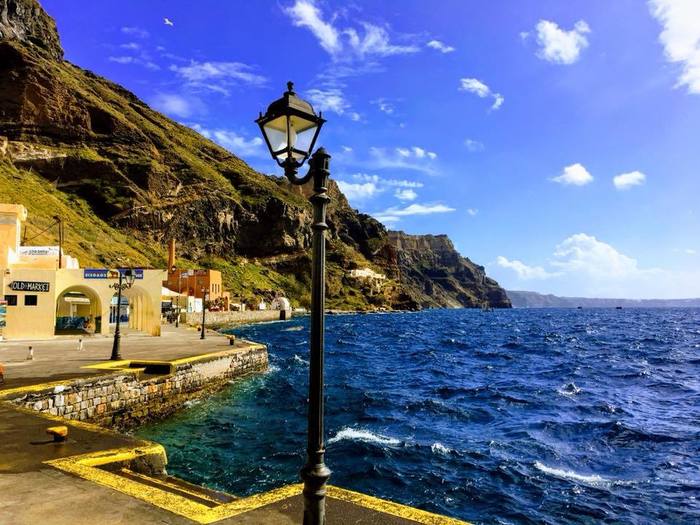 Day 3 — just a drive across the entire island

After a couple of unnamed beaches on way back, we reached the airport for a late night flight to Athens. We spent the night curled up in chairs at the Athens International Airport before our connecting flight to…

Overshadowed by the likes of Santorini, Zakynthos is an unassuming raw mass of beauty to the south west of Athens, with just 2 flights per day to the capital. A (relatively) large island with very little population density, Zakynthos is a place where you can drive for miles without seeing even a speck of life, and even when you do, it’s but a small blot on a vast expanse.

We reached early in the morning after a short flight from Athens and rented a car outside the airport with my Indian driving license, after some negotiation. We headed to our stay and after checking in, despite the overcast weather, we made a choice to step out. Wrong decision. The quiet drizzle on our Skoda soon turned into a full-blown hailstorm with large crystals of ice pounding the windshield. We were caught in the middle of nowhere with very poor visibility and a terrain that was risky to ride casually on, even on a normal day. Thankfully, we managed to find our way back to our acco and settled for Alaipayuthey on Prime over a basket of Pringles.

Over the next couple of days, we drove the length and breadth of the island with its peaks and valleys strewn with absolutely gorgeous views. It’s really a shame that Zakynthos is not as well known as the its sisters on the east - Santorini, Mykonos, Crete, etc. - and this, despite having Navagio, a crown jewel in Greek tourism. We spent the days in Zakynthos as follows:

Turtle walks are apparently famous in Zakynthos but we couldn’t get the time to do those.

With that, we almost wrapped up our Greece trip and headed back to Athens for our flight back to Bangalore via Doha. But for an impromptu plan in between.

Cape Sounio and Temple of Poseidon #

After taking the morning flight from Zakynthos, we realized we had around 8 hours to kill in Athens. And we decided to rent a car, again, and drive away from the city to the southern most tip of the mainland (hat tip to my friend Sudarshan for this suggestion).

To our luck, we got a convertible Mini Cooper even though we’d booked a humble Volkswagen. Wasting no time, we pressed on the throttle down highway A6 to the Temple of Poseidon, the god of the seas. After spending an hour there and a light lunch in Lavario, we headed back to Athens International Airport. 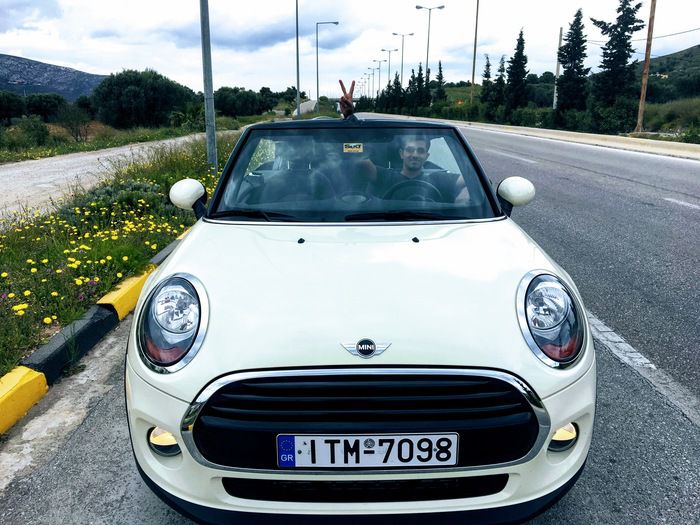 Through the winding roads along the coast on with the rooftop open, with a loved one by the side, and Ilaiyaraja’s Thendral Vandhu Theendumbodhu playing on the stereo. What more can you ask from life, after all? 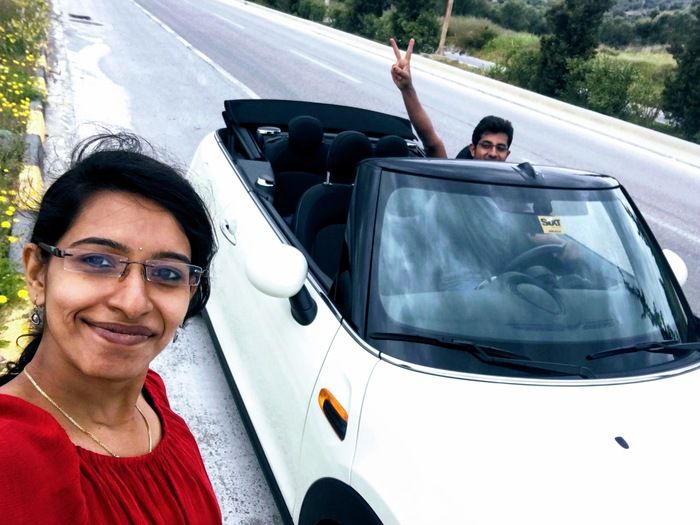 Anyone who has interviewed Product Managers (PMs) or interviewed for PM roles would tell you that it’s a pretty crazy role to interview for. You’re expected to be good at a lot of different things and at the same time, you are expected... Continue →